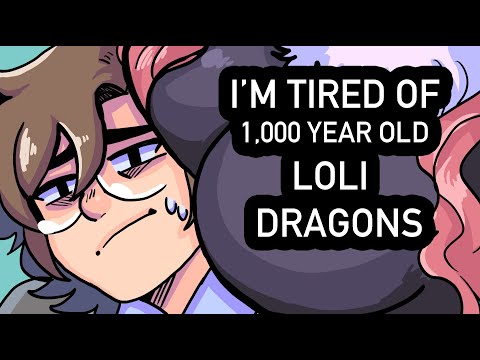 What ya think about it?

She likes drawing canonically underaged MHA characters like Bakugo in certain situations… She draws yaoi. Yet lolis are too far. Shotacon is fine, but lolicons are sick…

Perfect responses: Arguments for why lolicon causes harm? - #14 by LegalLoliLover1 Too bad that one of them got removed by YouTube.

Basically this is lolicon hate and moralizing disguised and something intellectual.

Judging by the comments, this person is a giant hypocrite.

This came to mind.

Perhaps neither is actually wrong?

It’s the age-old formula by people cowardly hiding in the cruel and arbitrary fences of what is considered “normal” by the majority, who are too narrow-minded to understand that others experience the same kind of disgust they so proudly present with the exact things they like.

People conflate taste with health so bloody much and it’s insane.
It’s also funny to see these people immediately cease their moralizing when actual Japanese people step in and call them out for being hypocritical and ignorant about art, culture, etc.

The anime community becomes a literal joke when moralists step in and preach like their content preferences are right and that which they are bashing or criticizing is anything more than just a harmless cartoon.

Lolicon pornography is completely harmless and they know it.

It’s the age-old formula by people cowardly hiding in the cruel and arbitrary fences of what is considered “normal” by the majority, who are too narrow-minded to understand that others experience the same kind of disgust they so proudly present with the exact things they like.

This mindset genuinely makes me question if the people who do this have issues with empathy.

The anime community becomes a literal joke when moralists step in and preach like their content preferences are right and that which they are bashing or criticizing is anything more than just a harmless cartoon.

Lolicon pornography is completely harmless and they know it.

The same moralist people have said things that make me think they’re more dangerous to children than lolicons.

The same moralist people have said things that make me think they’re more dangerous to children than lolicons.

9 times out of 10, they’re just saying stuff to try to sound or look cool, which is usually a sign that they’re underage. I fear for them the most because they’re the one’s who usually wind up being groomed themselves.

If you go on Twitter and poke around the fanfiction community, you’ll encounter a lot of hatred for those called “proshippers”, people who ship fictional characters with each other regardless of age difference, and some of them are genuinely callous.
For example, there was a story about a 17 year old kid who began to self-harm because they were outed as a proshipper, which they were, but because they’re young and vulnerable to that kind of mob-mentality abuse they had no recourse.
I’m unsure if they took their own life as a result of it, but I do recall reading posts from antis basically celebrating it because what they were doing was “much worse” than what happened to him.
I was confounded and enraged at the whole thing. I tried to archive it all to show how this toxic, regressive rhetoric actually undermines their supposed “mission”, but thankfully others took care of that for me.

There were also cases of antis DMing proshippers, basically trying to bully/harass them, which prompts the proshippers to say “it’s only fiction” and “learn the difference between reality and fantasy” and so on, to which the antis actually respond to by sending actual CP/CSAM, I guess as a talking point?? So they could directly compare a legal and fictional story or drawing with an illegal actual recorded instance of sexual exploitation and abuse??
Only for them to get immediately blocked, reported, banned, and likely investigated by the police for violating federal law…

In addition to all of this, there are various instances of CSAM peddlers and child groomers hiding within these communities! Predatory pedophilic persons lurking and interacting with minors in them so they can gain their trust, form “relationships” with them, and coerce them into sending nude pictures or videos, only for those images to circulate on Twitter and P2P CSAM trading groups.
There are documented instances of these kids calling out or exposing their groomers and harassers, often posting screenshots of DM conversations on Discord or Twitter, along with cropped/censored examples of illicit material showing up in other DMs or posts sent to them or that they found. The consumers and disseminators of this type of criminal material are often groomers themselves who share bits of personal information about the minors depicted which leads to victims being harassed.

I’ve filed Cybertipline reports and sent emails to the NCMEC in the hopes that they could be made aware of the tactics being used by groomers to exploit children or simply say something about these groups or communities, or maybe publish something to help educate or inform these kids on how to stay safe, all to no avail.

To put it simply, this type of crap wasn’t as common back when the majority of people online knew the difference between a drawing of a fictional character and a real-life instance of child sexual exploitation.
People knew damn well that fiction was not reality, and that consumers of said material were not at all likely to commit acts of real-life CSA because of it. There was no fear, anxiety, or paranoia, only disgust from those who would simply turn away or avoid loli/shota like any other thing.

Very true. Especially that first sentence. Essentially, they think that they are Internet paladins hunting “monsters”… Which further goes back to my previous statement about feeling camaraderie to vampires, especially those who specialize in hunting Hunters.

“The anime community becomes a literal joke when moralists step in and preach like their content preferences are right and that which they are bashing or criticizing is anything more than just a harmless cartoon.”

They convinced me to create a twitter account and i harrased some people and made stupid jokes, but sometimes i wondered if that i was on the right side. How exactly I ended up here would be a post for another day though.

I got nominally temp-banned on Twitter, but it’s a de facto perma-ban because I refuse to change my banner and avatar out of principle. I know that the rules do not allow explicit avatars and banners, but bikinis are not explicit.

I liked her video, although I totally disagree with it. Well, at least, she unlike everyone else shows at least the minimum of respect and empathy. And anyway, I wrote a lot of comments there (in the second part of this video), and my arguments haven’t changed:

As for propaganda films, I did reply saying that if they are as ridiculous as their detractors claim that they are, then they should be shown anyway, so that we may laugh at them. None of that “he who must not be named” bullshit.

That’s a very good video, I just disagree with the part near the beginning where the narrator implies that lolicons have a craving for real children too. This simply is not true. In most cases at least. Oh, I guess there is a part where he implies that we can’t defend that lolicon is harmless, which obviously I disagree too. But anyway, in general, the video is very good.

Edit: Also, I going to accurately translate what the Canadian Parliament said about this:

“For us, our opinion is more important than evidence. We didn’t like what we saw on lolicon. And we assume it’s going to harm children because that’s convenient. The parliament wants, in addition to avoiding real abuses, to prevent anyone from imagining that, because it’s gross. We admit that this hurts freedom of expression, but we don’t care about the freedom of expression of those who like those things. The only important freedom of expression is our own.”

And my personal opinion about it: The fact that a group of self claim “thinkers” actually didn’t see anything wrong in that, is the main reason that I don’t respect human intelligence.

What’s annoying is that this only appears to apply to loli, not shota. For example, in the early episodes of Mushoku Tensei, we get shota dick, but we don’t even get loli nipples in the same scene. Probably because of some nonsense that men, which is to say male viewers, are of a potential danger to society or some nonsense. While I am not one of them, I laugh knowing the fact that male enjoyers of shotacon exist.

All of this is the result of something I talk about a lot here. Everything that orbits the idea of pedophilia has a much more emotional and instinctive origin than a rational and logical one. Human beings have the instinct to protect children, and also to protect women. So little girls have this effect “enhanced”. Anyway, anything that gives the feeling that there is a little girl being hurt will cause commotion and anger in people. So, avoid trying to over-rationalize the "why"s of those things, because you will likely only get frustrated. So, why is bad only when is a child? Why is bad only when is a girl? Again, the “reason” for this is purely emotional.