Soooooo... is anyone gonna address this Please tell me you see something wrong with this image.

What a tragedy it would be to classify this very real phenomena according to the terminology which most completely and accurately describes it. If we did that, then we might besmirch the precious virgin white purity of the term… “Sexual Orientation”…

Ohhh the humanity of it…

There’s truly nothing we won’t gatekeep is there?

It’s a fact that when you use this term, no matter how accurate it may be scientifically, it conjures up a whole load of assumptions about civil rights and the LGBTQ+ community that derail the conversation. I did say that we will have a scientist to write about this, and we will.

My friends and I do deserve civil rights actually

It’s a fact that when you use this term, it conjures up a whole load of assumptions about civil rights and the LGBTQ+ community that derail the conversation.

I mean so does the term “MAP”, yet you still use that constantly. I feel like you might as well just double down.

It’s a fact that when you use this term, no matter how accurate it may be scientifically, it conjures up a whole load of assumptions about civil rights and the LGBTQ+ community

If you’re not going to use the scientifically accurate term for something because “it’s problematic” then how do you even exist, you whole existence is “problematic”.

Support of MAPs is “problematic”, but it’s the correct thing.

Sex positivity is “problematic”, but it’s the correct thing.

Using the term MAP is “problematic”, but it’s the correct term.

Since when were you guided by popular opinion?

Talking about this topic is never going to make us popular, and that’s not our intention either.

There are a whole load of assumptions about MAPs, a major one being that it’s not a sexual orientation and is chosen, are those assumptions okay?

Minor-attraction is a sexual orientation, Prostasia isn’t denying that fact.

But when factoring things in the LGBTQ+ community, then that’s when things become complicated. Ideally, NOMAPs should be included in that, and with time, hopefully they can be, on the condition that they’re anti-contact.

People are scared about this, and they have a right to be. Pro-contact and pro-reform MAPs want to change things that allow them to have sex with children, which is inherently and innately harmful to them, and the near-conclusive risk of trauma justifies prevention and criminal sanctions against adult-child sexual activities.

So factoring those into the equation and getting a proper dialog going is what’s necessary, and that takes time, evidence, and research. The LGBT community had to put up with ‘bug chasers’ wanting to infect people with as many STDs as possible during the HIV/AIDS scare, which lead many people to be skeptical of openly gay men and women, moving so far as to deny them the basic civil liberties they deserve.

Did the existence of bug chasers justify society telling gay men and women that their sexuality is what defined their roles in society? No. Absolutely not. And the same concept applies to MAPs.

“But when factoring things in the LGBTQ+ community, then that’s when things become complicated. Ideally, NOMAPs should be included in that, and with time, hopefully they can be, on the condition that they’re anti-contact.”

I understand that the term “Sexual Orientation” is for better or worse, inextricably connected to the LGBT+ community.

It shouldn’t be however, and saying the above to some degree acknowledges the role that the term “sexual orientation” had in legitimizing the LGBT+ community and the reality of their attractions.

The term has utility; it carries with it assumptions, and it carries with it baggage, but I would wager that most of said assumptions are beliefs which we would want to persuade them of anyways. Some I will admit such as marriage equality or the like aren’t positions we hold, but I think we should simply correct said suppositions rather than outwardly abandoning the term and all it’s associated utility.

Ideally, NOMAPs should be included in that, and with time, hopefully they can be, on the condition that they’re anti-contact.

What’s “that” in this sentence?

My friends and I do deserve civil rights actually

Of course, but when you use “sexual orientation” you don’t necessarily want to have two conversations at once, if all that you want to refer to in that moment is the fact that pedophilia/hebephilia is an unchosen and lifelong condition. That’s why in the quoted tweet I just said that we “avoid” using that terminology, not that we deny it. In the upcoming article, we will be talking about it directly. Screenshot_20211105-1137121079×1652 137 KB
My issue is that, in context, the concern being raised in Rofllcat1’s original reply is that the use of the term “sexual orientation” will cause MAPs to believe that they shouldn’t be ashamed of their attractions. Since Prostasia actively works with experts who advocate self-acceptance as an effective form of treatment, I’m assuming that Prostasia would consider MAPs not being ashamed of their attractions a good thing, however, since there was no clarification on what “problematic associations” Prostasia’s reply was talking about, the assumption that’s going to be made by anyone reading the thread who does not have background knowledge on the topic (which is likely going to be most people considering the recent social media attacks) is that a child protection organization just called MAPs accepting themselves “problematic.”

It’s less of an issue with whether or not you don’t use that term - I honestly don’t care what you call it as long as it’s not stigmatizing or misleading - and more that your explanation as to why is going to be misread by anyone who doesn’t already have an understanding of what treatment and support for MAPs consists of.

OK, thanks for your feedback. As you know, we are receiving a lot of hate right now, and sometimes my instinct is to write whatever will deflect and defuse that hate. My intention was not to deflect it onto MAPs, and it is frustrating (but understandable) that in trying to placate one side, we’ve upset the other. It’s really a no-win situation for Prostasia right now and I am very frustrated (but not with you) about the whole mess.

Of course, and honestly I’m not offended or surprised by the fact it happened. I’ve been attacked online before and I know how easy it can be to unintentionally throw people under the bus or just be reactionary. Just wanted to provide feedback for future reference

The irony is almost tangible

Let’s apply their obviously brilliant and well thought out approach in another context, one which the general populace might be a little more familiar with.

And by doing this, you protect people from violence…

Hm… Might be a trick of the light but this almost seems like the exact opposite of what should be done. Very puzzling, I can’t imagine why that would be…

When people claim MAPS are “dangerous” and are “at risk individuals”, and then suggest this . It just gives away the whole game. 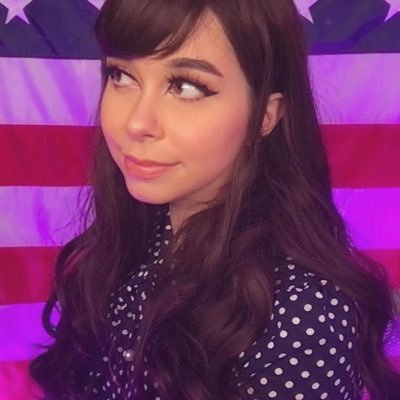 @shoe0nhead
the founder (terminus) is currently being attacked by his fellow “MAP”s for lying about their beliefs to the public, admits he’s just trying to deflect hate dont trust any of their damage control https://t.co/4rvh6oxt2w 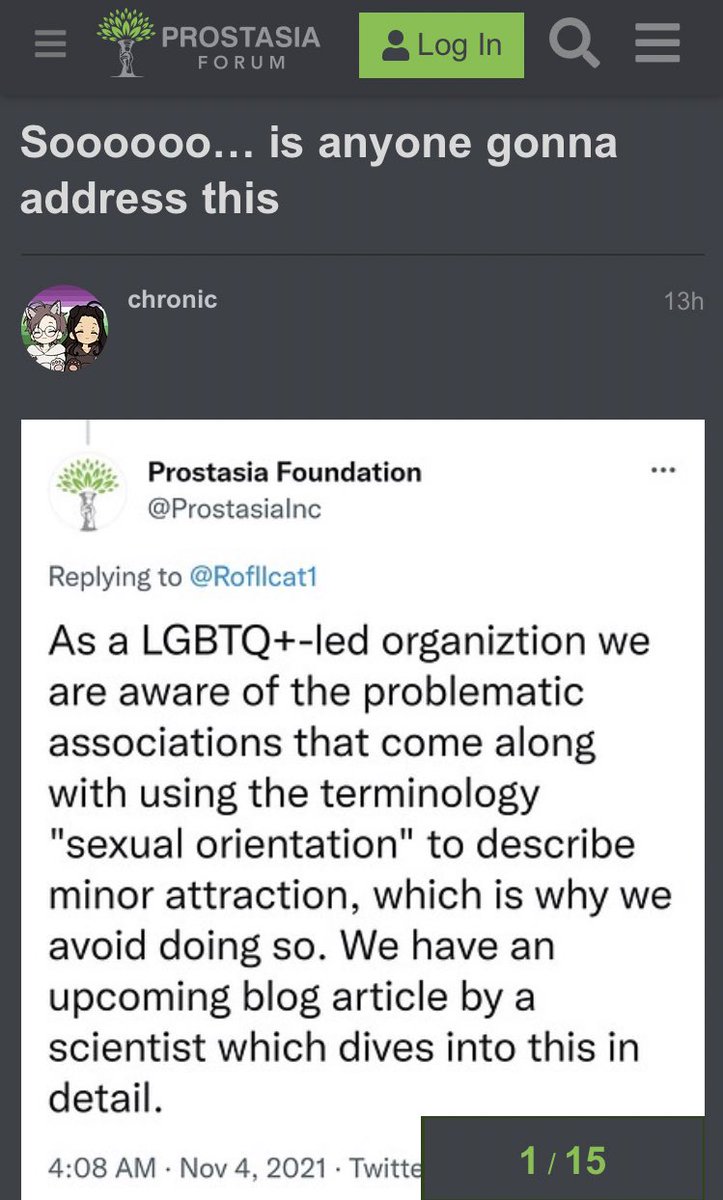 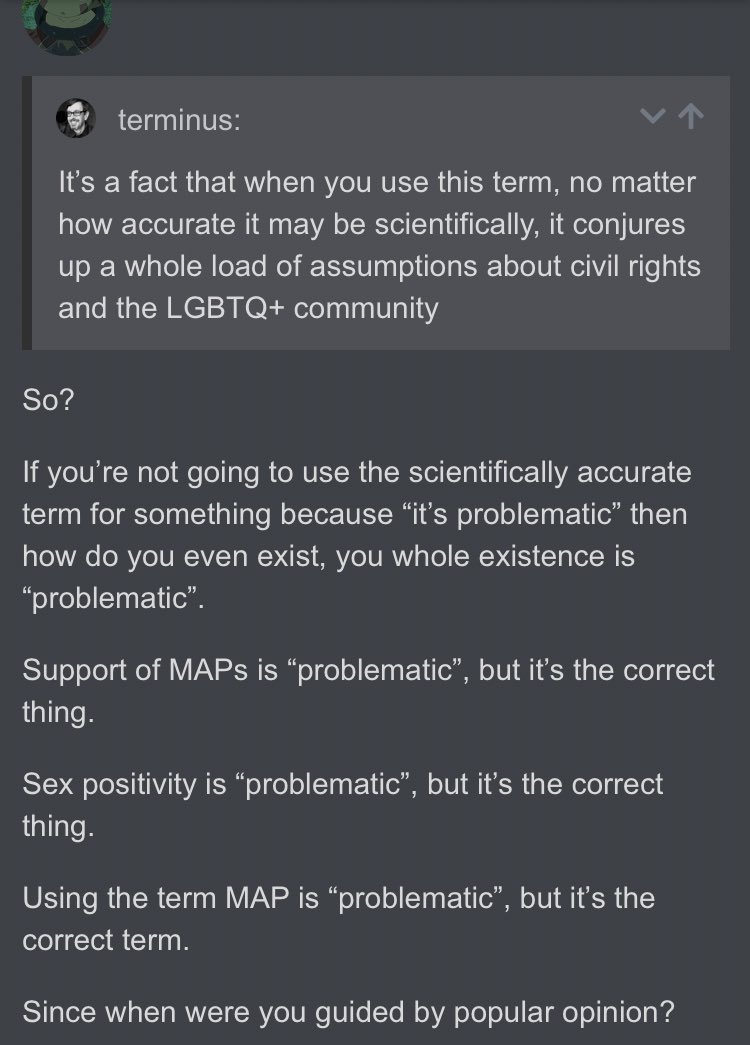 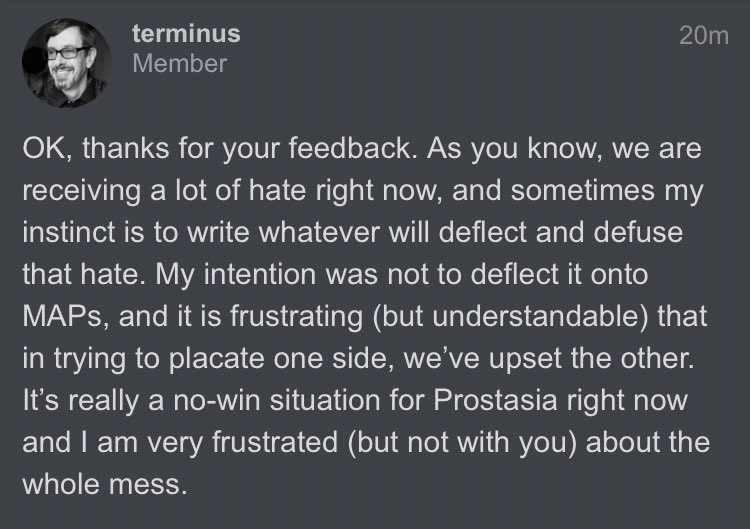 She’s has good grift going I’ll grant her that, but in terms of substantive critique of our organization, I think she’s giving herself way too much credit.

I also find it somewhat amusing that she’s only going after posts on the forum, which are mostly written by people who have nothing to do with the running of Prostasia at all.

But then again, critiquing the very well written and reasonable posts on the official blog would require effort as well as an IQ marginally above room temperature.

I can’t say I expected more of her, it is what it is.

Any disagreement is “attacking”, they always take things out of context to portray things more aggressively.

I also find it somewhat amusing that she’s only going after posts on the forum, which are mostly written by people who have nothing to do with the running of Prostasia at all.

Yeah, antis never seem to realise this is just a discussion space and not everything or everyone here reflects the views of the organisation.

What’s so strange is that @prostasia has already been upfront about LGBT governance/inclusion and sexual orientation in the past.

What’s funny is shoe0nhead is deliberately taking things out of context and misrepresenting facts to suit her narrative, a patently false and discredited one, at that.