Why is Prostasia being massively attacked on twitter right now?

What happened? I just logged into twitter, and saw Jeremy discussing with a lot of people and also that Noah Berlatsky had locked his account. And then when I decided to search “Prostasia” on twitter search, there were a lot of tweets w/ hundreds of of likes attacking the organization and in Prostasia’s twitter account itself there are a lot of people replying w/ hate tweets. So…what the hell has caused all this?

So…what the hell has caused all this?

Easy Twitter is full morons who want to be outraged.

The brunt of their outrage seems to come directly from Ayden Ferdeline and outrage at Noah Bertelinsky.

@terminus Something may need to be done to appease them. Maybe some transparency about Prostasia’s policies, beliefs, etc?

I got into a spat with someone who claimed that the MAP Support Club was just a front to solicit sex from children, which isn’t true in the slightest. When I criticized them and asked for a source, they said I was ‘one of them’ and blocked me. Clearly, a proper debate is not what these people are after.

This is Andy Ngo’s fault he tweeted about us and i think he started this shit. 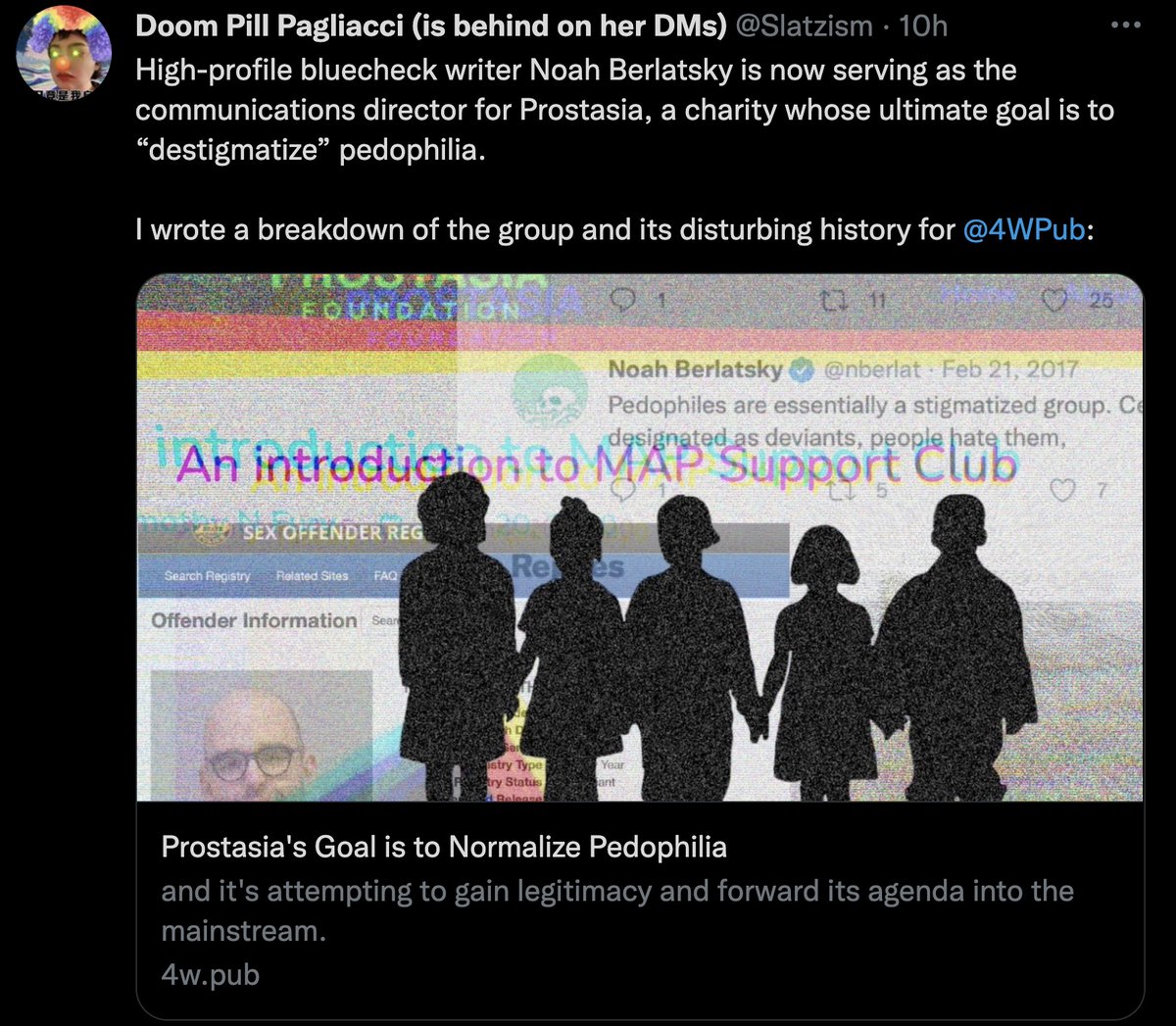 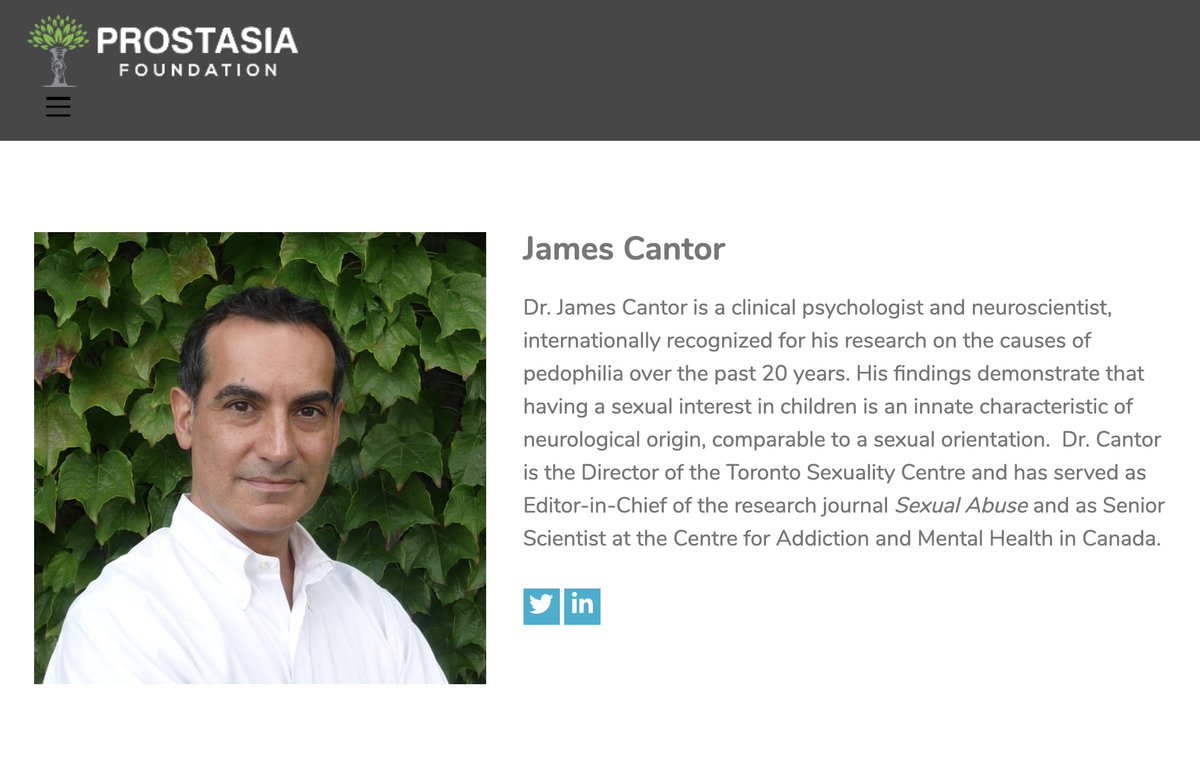 To add to this, the famous political influencer known as Shoe0nHead has discovered Prostasia as well and her tens of thousands of followers are losing their absolute shit over the existence of prostasia so prepare for an absolute slaughter-fest.

That’s Twitter for ya. Im just an ally and Im sadly not that surprised tbh.

This is going to be interesting. Many of these alt-right and political moderates are going to be showing their true colors as populist political hipsters.

Much of their animosity seems to be geared towards the MAP Support Club, which does staff actual counselors and whatnot to keep things civil and safe.

Your communications director really messed this up.

So you got a journalist (Andy Ngo) with a massive following of almost a million people. He asks if the false allegations against you are true. And you know nothing better than block him and call him a faschist.

Great! Now he will surely think better of your organisation and tell his followers how great you are. /s

Just reach out to him and explain yourself. Tell him about your organisation and why there are so many misunderstandings about this topic. Build a bridge dammit!

Andy Gno is a conservative blogger and columnist from Canada. I’ve seen his work, I’ve read his articles and opinions. He is not worth appeasing or appealing to, and as far as the drama with Noah Bertelinsky is, I’ve not seen anything from him that could be held at fault by him.

I highly doubt a child sex abuse prevention/child protection charity that employs sex positivity and evidence-based research to ground its points and mission would be able to sway someone like him. Conservative ideology is a cancer that hinders on the appeasement of emotional and cultural sentimentality.
Andy Gno reminds me a great deal of Milo Yiannopoulos, in a way, but is far more credible.

Shoe on head in the queen of cringe, of course it had to be her.

Shoe on head and her boyfriend are lefties. They made that public a few years ago after building up an anti sjw audience. Shoe survived since the still shits on the ““radical left”” but her boyfriend (armored skeptic) has been in the red for quite awhile recently going under 500 thousands subscribers.

I consider myself to be a shameless ‘‘radical leftist’’ but you would be very hard pressed to find anyone on the right or left who is even remotely sympathetic to prostasias mission.

Virtually all leftists and right-wing people agree that pedophiles are subhuman but they have different ideas on how to deal with them. Right wing people want all pedophiles dead while leftists want pedophiles castrated and lobotomized but not executed because the death penalty is immoral.

I also find it interesting how leftists will be willing to listen to Andy Ngo as soon as he starts talking about pedophilia.

Basically, the same reasoning why Native Americans should not have any vested interests in the American Revolution nor the American Civil War (I know for a fact that rival tribes fought on both sides of either conflict, but they should know to consider either one to be “allies of convenience”, rather than “friends”). It’s best to wait for both sides of those conflicts to weaken each other and then pick off the survivors.

Nah, you can’t argue that. A lot of people are also supportive, or neutral on this topic. You just shouldn’t look into Twitter or Social Media in general to get your statistics. Those places are filled with cancer and also probably a reason why humanity, after centuries of development, is actually getting dumber now (yes, there is scientific evidence confirming this). We are getting dumber in terms of reasoning, but smarter in verbal intelligence. Younger generations also have a lower IQ than current adults back when they were teens.

You see this everywhere. No need to do your own research when Twitter agrees with you, why bother checking sources, or studies? Schools changed for the worse and memorizing is still the way-to-go. People sharing news and saying “OMG LOOK LOOK” because of an eye-catching Headline, but then the actual content is completely different. This is especially true with pedophilia where hivemind is more evident than ever before. Science denialism is getting worse and so on.

This is kinda happening with Prostasia on twitter in a way too, a lot of people are attacking the organization just because they read the title of a blog post that they found “strange” or found "wrong"ou understood that the article was meaning something that it wasn’t, for example they took a screenshot of Noah’s article(actually just the headline of the article) on adolescence autonomy and started implying that the was saying that “kids can consent” or something like that!

Virtually all leftists and right-wing people agree that pedophiles are subhuman but they have different ideas on how to deal with them. Right wing people want all pedophiles dead while leftists want pedophiles castrated and lobotomized but not executed because the death penalty is immoral.

I quite agree with your assessment.

Conservative ideology is a cancer that hinders on the appeasement of emotional and cultural sentimentality.

Just because you don’t agree with someone is not a reason to call them the devil. They believe in their ideals as liberals believe in their own. That’s the idea of Freedom of Speech. Of course, you have to listen to them sometimes.

Just reach out to him and explain yourself. Tell him about your organisation and why there are so many misunderstandings about this topic. Build a bridge dammit!

Simple. Any platform that treats non-offending pedophiles like human beings and allow them to speak out against child abuse will be attacked by those who see them as less than human.