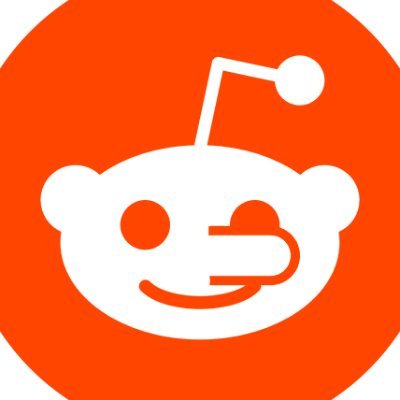 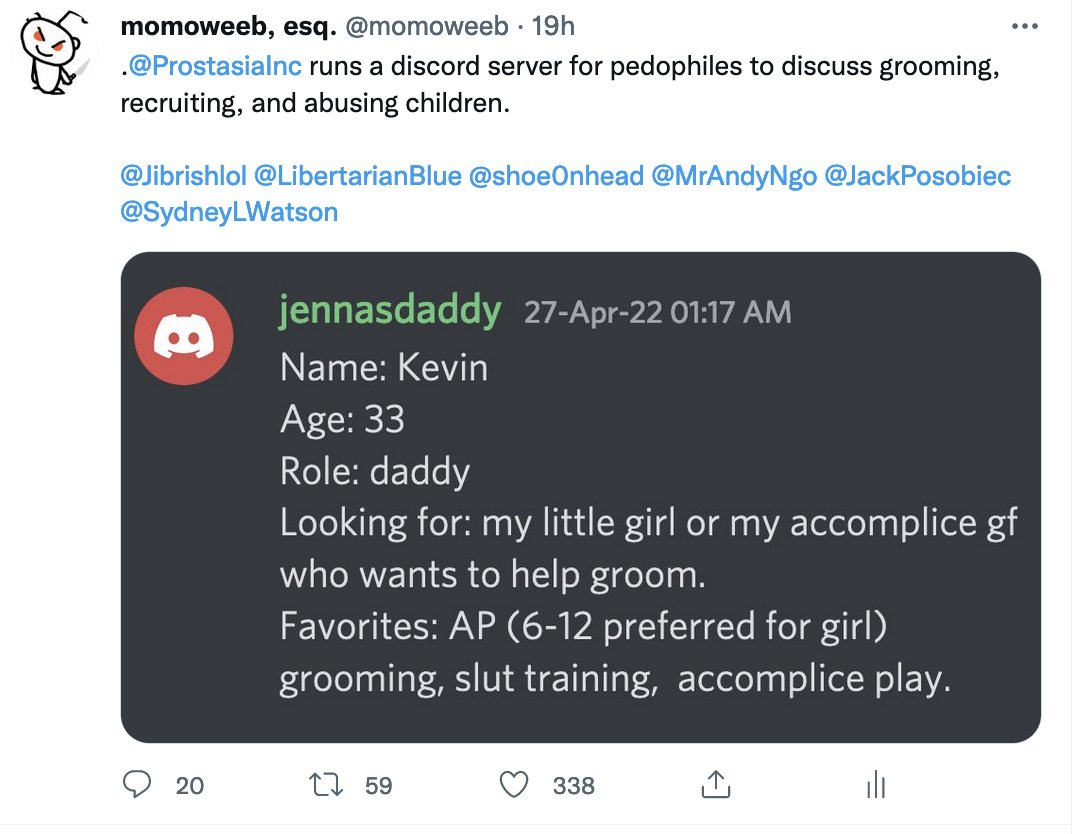 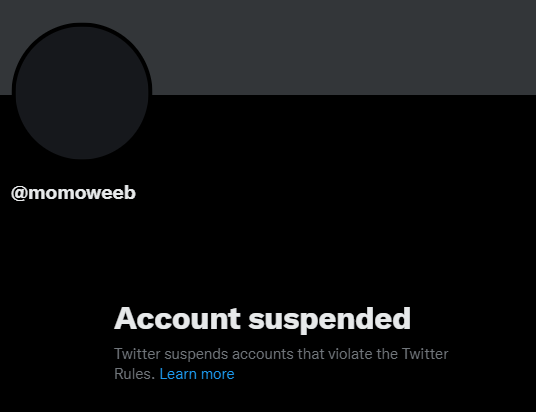 They claim that a twitter account called “momoweeb, esq.” was banned while “exposing prostasia” That makes alot of sense, since as we all know twitter is super pro map, and very nice to the prostasia foundation.

The banned account posted that screenshot as proof that the prostasia discord server was grooming children.

I was able to find the welcome notice for “jennasdaddy” but no posts from them on any discord channel. So they ethier just doctored a screenshot or they made a post and was banned instantly.

Never forget that people will lie about anyone they don’t like on the internet, so never believe claims unless they can provide evidence.

Also this shouldn’t have been the job of “gays against groomers” to call out, it should be “pansexuals against pedophiles”

Is that even the same font that Discord uses, or how dates are formatted?

So they ethier just doctored a screenshot

This was made so much easier with the “inspect element” feature in Firefox.

Even if it is fake, it still does raise a valid point regarding moderation.
Who do we have that’s also able to moderate that server?
To keep bad actors from coming in and just posting garbage, or perhaps even misusing it for nefarious purposes?

While Prostasia is still in a period of transition, it might be wise to close down the Discord since it’s really not necessary, in my view.

The Forum is enough

There’s also a WikiHow page which delves into it, but I’m still unsure. 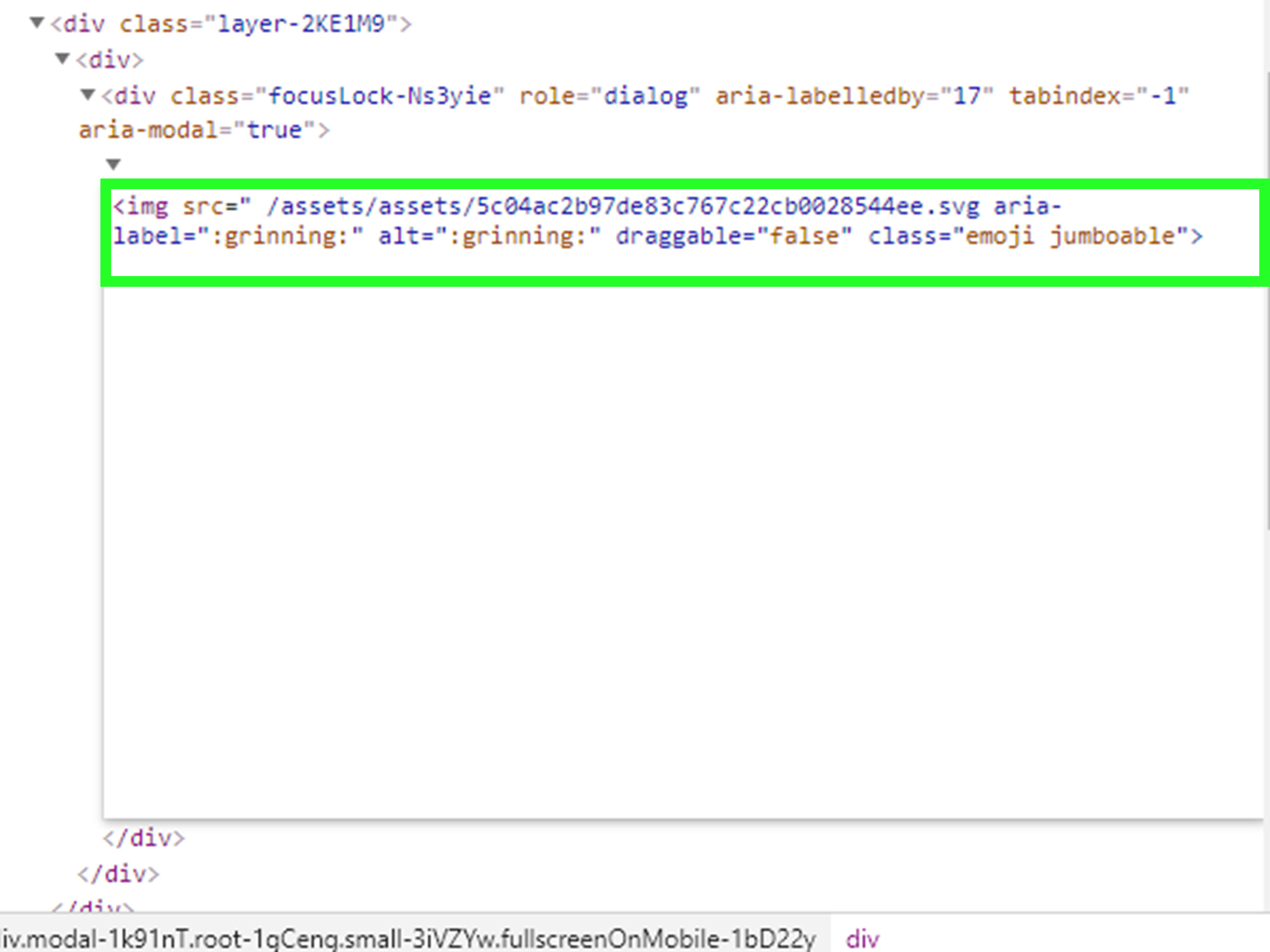 An easy-to-follow guide on how you can fake Discord messages using developer tools like Inspect ElementTo get your way or play a prank on friends, faking messages on Discord can be pretty handy. Using Inspect Element in Developer Tools,...

Only terminus has moderator power in the discord, he also doesn’t seem to use it much though so its basically unmoderated. It should have shut down along time ago.

That’s not true. I and several others on Prostasia’s staff have mod powers there. It’s not very active so moderation is usually unnecessary, but we’re equipped to handle it. Malicious actors will always seek to take screenshots of rulebreakers before mods get to them and share benign posts out of context, that’s not a justification to shut down safe spaces for survivors and others who support prevention.

From what I’ve seen, Elliot is correct. I’m not a mod myself, I’ve only posted twice, but every time I’ve checked in it was extremely quiet and reasonable.

Was that screenshot real? Because to me, it appears doctored.

It was the introduction posted by a new member in the discord. As far as I know, the member never posted anything else and the post was removed by mods shortly after being brought to our attention. It was an actual post, but I can’t speak to the intentions behind it. Considering the spike in controversy surrounding Prostasia around that time, your theory that a malicious actor may have posted it to make us look bad isn’t unreasonable.

I’m not sure why the date showed up the way it did in the screenshot. Perhaps that’s a setting you can change in Discord. It shows up with slashes for me

Well, I appreciate you being there to keep an eye on things.

I still stand by my previous statement that the discord ultimately seems unnecessary for a nonprofit to have, but I digress. Maybe @terminus could be convinced to delete it at some point if it becomes a problem.

I feel like all your concerns regarding the Discord could be just as easily applied to the forum. Shoe0nhead, for example, took numerous forum posts out of context and used them to spread misinformation about our mission. I’d argue that both the forum and the Discord serve a purpose, as Prostasia often uses input from its members and supporters to guide its priorities and positions. Plus access to community is important for survivors, and I’d assume Prostasia wants to provide access to safe spaces wherever possible. The Discord, in particular, provides a more private space, which can be particularly important for survivors and members of other marginalized groups.

I don’t disagree that there’s some risk to maintaining public spaces for people to discuss controversial topics like evidence-based abuse prevention, but I don’t think allowing people who oppose prevention to bully us into shutting down those spaces is the right move either.

feel like all your concerns regarding the Discord could be just as easily applied to the forum. Shoe0nhead, for example, took numerous forum posts out of context and used them to spread misinformation about our mission.

Yeah, but the difference here is that the information on the forum could be easily looked up or investigated, whereas a Discord server is far less likely to have that since simply being in a server can mark somebody’s account for deletion, and most people aren’t going to create a burner account anyway.

They’ll just trust whatever they read or hear from and go off of that.

Simply calling out June’s shitty video in my thread was enough to discredit her narrative to those with a brain, in addition to other outlets and observers with actual pull or REAL integrity.

I find it insane that certain humans go to such extreme measures to sabotage, jeopardize, misrepresent, and slander groups who are serving good and best interests, especially the best interest of children. Mental disease plagues humanity. How sad and intriguing.

If you want some explanation of the ‘insanity’ that induces people to “go to such extreme measures to sabotage, jeopardize, misrepresent, and slander groups who are serving good and best interests,” see comments on ‘strength morality’ vs. ‘conscience morality’ in Republicans Need (Fake) Pedophiles to Win Elections – Have They Hit the Jackpot with Groomergate? | thismoonlesssky

It will help anyone who supports rationality to understand the psychology of sex-related liars who may seem insane, but are really just using a tactic against people who are feared as destructive of social militaristic uniformity.