WHY DO YOU FUCKING CARE. So much about this. I don’t get it. Why does degeneracy need to be protected in Public? It’s clear obscene pornography normalizes abuse. We are seeing skyrocketing rates of sexual assault on women and children for fuck sakes! I wish I lived back in the 80s when this issue was not as horrible. Sexual abuse, particularly towards children has always been a huge issue, but man it’s far worse in 2020 than it ever was. Rates of rape, child molestation, etc are up 10-20 fold increase than they were in the 1990s. Thanks to the normalization of sexual exploitation of women and children.

We need stiff penalties of anyone involved in degenerate forms of pornography and hardcore pornography. Everyone, from the photographer, the director, and the actors and models themselves should be prosecuted on the federal level.

Whether you want them to be given probation only, or prison, or executed, I will leave that up to the judge or you to decide. But they must never be allowed to pollute our culture with this horrible degenerate stuff. It is a very serious crime to do so and must never be tolerated.

I FUCKING WISH I could return to my teenage years in the 1980s I FUCKING WISH I FUCKING WISH that because things were so much simpler back there without all these fucking simps, liberals taking control of everything. California is RUINED thanks to liberals and degeneracy.

I redacted screenshot of the person you were hating on to protect their privacy cause fuck you seriously. 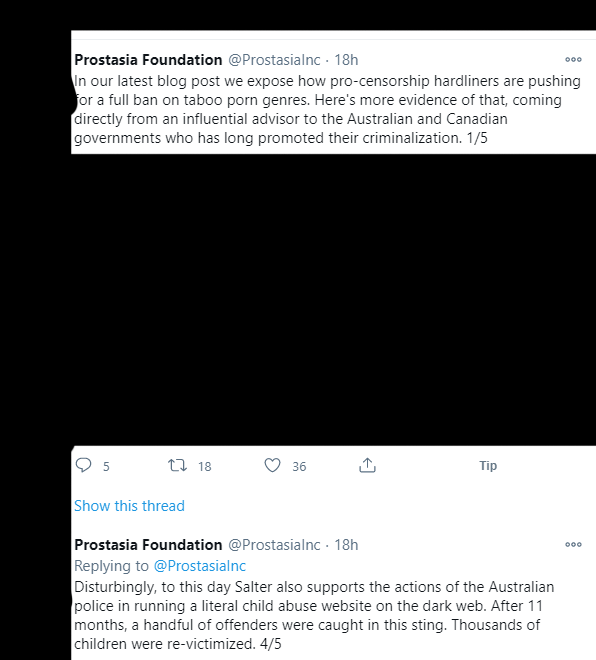 WHY DO YOU FUCKING CARE. So much about this. I don’t get it. Why does degeneracy need to be protected in Public? It’s clear obscene pornography normalizes abuse. We are seeing skyrocketing rates of sexual assault on women and children for fuck sakes! I wish I lived back in the 80s when this issue was not as horrible. Sexual abuse, particularly towards children has always been a huge issue, but man it’s far worse in 2020 than it ever was. Rates of rape, child molestation, etc are up 10-20 fold increase than they were in the 1990s. Thanks to the normalization of sexual exploitation of women and children.

Absolutely nothing in this paragraph is true… it’s all misinformation. Sexual violence has fallen by more than half since 1993. If you believe otherwise, that’s because you live in a QAnon misinformation bubble. And there are plenty of threads already on this forum which show that access to pornography is not linked with abuse, and that the opposite could well be the case.

If you don’t get why following a public health approach to child sexual abuse prevention is more important than an ill-fated battle against (your definition of) “degeneracy,” then I guess you never will. So it baffles me why you are even hanging around here, with a bunch of people who you’ll never convince, and whom you’ll never be convinced by. Hmm, maybe someone should get scientists to actually research this theory of yours?

Oh, right, that’s exactly what we are doing.

Look, seriously, just stop creating new accounts here and get off our forum. You have made your case plenty of times, and there is nothing new that you have to say. You don’t like the idea of other people being sexually interested in things that you’re not. We get it already. Move on.

First of all, I don’t think you understand how statistics work or how they can be read.
There is no “steady increase” in sexual abuse or assault. If anything, you’re deliberately cherry-picking a specific range of variables to make it seem like they’re correlated with the proliferation of pornography in our culture.

We’ve actually seen an overall DECREASE in sexual assault between the 1990s and 2010s, which correlates directly with the explosion of sexual expression.

Also, RAINN is a good charity that does good work, but these statistics are not final, nor are they definitive.

Never been to your garbage forum, but I am part of a group chat on twitter and they told me to create an account here and what to say and what screenshots to post, how to create anonymous, how to set up emails so people like you can’t abuse our data and a number of other anonymizing tools to protect ourselves from the likes of you. We don’t trust pedo sympathizers and never will. I don’t want to get doxxed. I find your forum abominable. This forum does not look like a child protection forum. It looks like a forum of free speech extremists.

OK, so you’re not just a troll, but a puppet who is facilitating ban evasion. I’m giving you an account suspension for that, and for your use of slurs and insults.

You’re wrong. There are also huge bodies of experts who argue the exact opposite and record statistics that counter your points. These are unverified, unqualified acts of conjecture are based solely on prejudice, fear, and irrationality.
Freedom of speech is the correct option. It is observably, demonstrably, and palpably beneficial for society and should be protected at all costs, unless intrinsically linked to instances of actual, real-world harm.

If you have evidence that counters our points, then please cite it. We are an organization based on science, after all.

Well, I can’t help to find it ironic, that a person whose observations, as incorrect as they really are, has led him to conclude that ever since the year 1980 the situation with sexual abuse in the US has been worsening while noticing that Protasia is the first organization whose goal is to help fight this issue in a way, that is the opposite of what all the previous organizations that promised to fight this issue so far since 1980 have been doing, yet still believes, that the old methods are effective.

You notice that the situation is worse.
The organizations that promised you to improve it has failed.
And you still double down on the already tested and proven ineffective methods, claiming it’s all fault of a “normalization of sexual exploitation”.

Do you know what that reminds me of? A young stereotypical Antifa member, who believes that we should implement communism to liberate the working class, while acknowledging that communism has already been tried in the soviet union, and resulted in the millions of working-class people being dead, but makes the same blank, devoided of any reason statement “but it wasn’t real communism”.

You are literally like this Antifa member, you supplement your lack of knowledge with anger and ignorance, in a blind belief that your ideology is superior, without any proof of that being the case. What you do instead, is you fill yourself with an unearned sense of moral superiority, to cover the insecurity that raises every time you realize, that you actually know nothing about the world.

We need stiff penalties of anyone involved in degenerate forms of pornography and hardcore pornography. Everyone, from the photographer, the director, and the actors and models themselves should be prosecuted on the federal level.

Sure, let’s start with you, you barely registered an account and yet you instantly began writing softcore erotica fanfics with a theme of “revenge rape” in a prison setting performed by a protagonist you have named “Big Bubba”:

Better idea: Let the child molester get a taste of his own medicine. He can be good room mates with Big Bubba. He will finally know what it’s like to be the vulnerable one.

It’s a nice premise, you clearly have a talent and a great imagination for these types of stories, you must have been spending hours developing the entire idea, but sadly, the text you wrote, as short as it is, could still very much be constituted as obscene material:

You passed the Millers test, you broke the law, you are now a criminal, and the only reason why you won’t be risking up to 20 years in prison, is because no one in here is so cruel to enforce the obscenity laws against you and ruin your entire life over a stupid post.

So to answer your question What type of “Child Protection Charity” persists so hardcore over this issue?

We are seeing skyrocketing rates of sexual assault on women and children for fuck sakes!

I have a theory about it, it’s not that simple, but I think I’ll try to simplify it as much as possible, even at the risk of being misunderstood, but iI’m not in the mood to write a huge text today.

My point is more or less this:

You (or at least most here) want ALL pedophiles, to be arrested and / or die, Even those who don’t intend to abuse:
So any pedophile will think “Well, why am I going to hold back my urge to rape children, if I’m going to be arrested / kill no matter what I do?”

Also, what does this have to do with your sentence? Well, one other thing that has been growing exponentially lately, is this spread of hatred against pedophiles. Anyway, think about it.

PS: I know that this is not the ONLY problem. But is a problem most people ignore.

I wish I lived back in the 80s when this issue was not as horrible.

The good old 80s when everyone pretended these problems didn’t exist? And the little choir boys would give tips to each other on which “wicked priests” to stay away from, because the police most certainly won’t keep them away?

The good old 80s when everyone pretended these problems didn’t exist?

The issues have certainly gotten better over the years, but to imply that things were “better” back then because we didn’t have the Internet is just wrong. A big reason why puritans hate pornography so much is because it reminds them of sexual feelings they choose to associate with shame, much the same way a racist chooses to associate people who aren’t their own race with negativity and stereotypes.
It’s prejudice. And it hurts both sex workers and people who consume their material.

Thanks to Wikipedia, I know what “Chie” is a reference to.

So any pedophile will think “Well, why am I going to hold back my urge to rape children, if I’m going to be arrested / kill no matter what I do?”

In any case, a better argument is that someone is innocent before proven guilty in a court of law. Executing someone because they have a potential to do something you don’t want them to do does not meet that standard. But, it certainly meets the standard of fulfilling some strange and bizarre violent fantasy. Is the next war in the Middle East that overdue? No strange people to other right now, falling back to the classic?

The apparent distinction between reality and fiction makes this so.

I hope there’s a difference. Can you imagine all the shit eaters running rampant?