Someone said you banned them from the forum for no reason a few hours ago because you lost an argument. How sad really.

Apparently this is a “child protection” charity that believes fucking rapists have rights. What a JOKE. 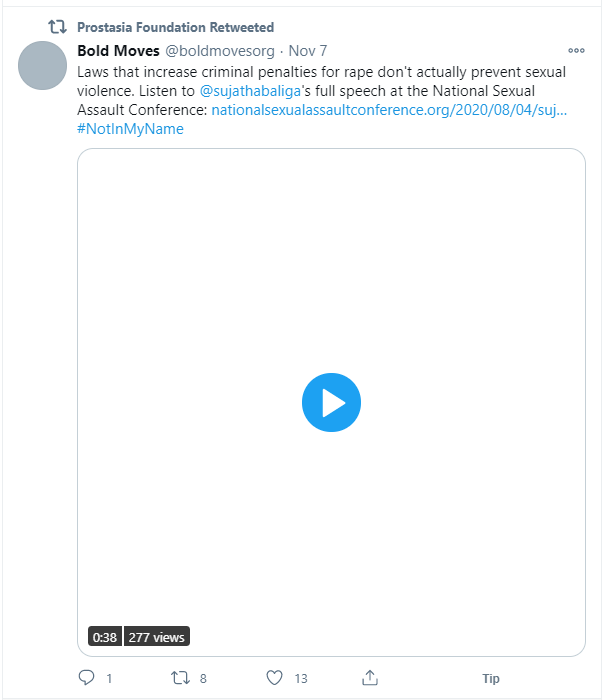 Doesn’t fucking matter if increasing penalties to chomos keeps us safe. If you won’t increase penalties, can you at least give vigilantes who hunt pedophiles an immunity shield? We can deliver what we see as proper justice!

And you still claim your motivation is protecting children.

can you at least give vigilantes who hunt pedophiles an immunity shield? We can deliver what we see as proper justice!

“I’d commit rape if I could get away with it”

A lot of us in Q would be willing to kill, torture, and sexually assault the predators who molest children. But we are afraid of being prosecuted for it so we don’t. If the legal system would give us some kind of immunity, we’d gladly take justice in our own hands.

This has been an idea being tossed around in our circles and we would like a legal representative to take a loot at it seriously.

In the extremely unlikely case you are serious: Child predators are scum and deserve punishment, but you don’t prevent crime by committing crime yourself.

Maybe read my entire post? If you disagree with one type of immunity shield, you should at least agree with the ability to kill them.

The vast majority of child molesters will never see the inside of a courtroom. It’s clear there are limits to what law enforcement can do. Maybe let the general public play a role in this. I think 1/500 actually get arrested or something? I can’t remember but this is entirely unacceptable.

We will not support your kind of cruel and inhumane “justice”, whether that be rape or murder.

Provide a solution than. How to we increase the % of predators who get prosecuted.

By listening to us and working with us on things. Your sick and inhumane agenda to kill, torture, and harm people is underscored by your ignorance.
It’s great that you want to see child molesters and pornographers prosecuted, but not good that you’re more interested in simply harming them than achieving justice. And I feel like that’s an issue which needs to be called out.

Provide a solution than. How to we increase the % of predators who get prosecuted.

Start by having an iota of humility, instead of barging into this forum with the assumption that the time you have spent in a hate group has taught you anything about the prevention of child sexual abuse. You and your QAnon buddies have been posting links to Stop It Now (which is actually a partner of ours, so we have no objection to that), but take a look at their website for yourself and compare their rhetoric to yours. Is the Stop It Now site full of bile and hate telling people who are looking for help that they are evil and despicable and that society hates them? No, it isn’t! And why do you think that is? Because it isn’t effective.

“Increasing the % of predators who get prosecuted” is a really unambitious aim. Our aim is much more ambitious, but has much more promise: preventing children from being abused in the first place. And you are interfering with that mission with your bone-headed, self-righteous bullying and threats.

They’re also harassing them, too.

@galilea858
Isn’t it past your state-mandated bedtime in the land of kangaroos and censorship boards?

Every day you people post on the forum, the prospect of range-banning the nation of Australia becomes more and more attractive.

I didn’t spent much time on StopItNow, all we know is that they have a pretty decent track record for getting pedos who possess this horrible stuff to stop. So it might be useful for addressing the evil pedo thoughts in general.

Is the Stop It Now site full of bile and hate telling people who are looking for help that they are evil and despicable and that society hates them?

No, but I’m under no obligation to sugarcoat shit. QAnon is not a professional group. We are a loosely associated group of individuals. We do not need elitist academics telling us how to live our lives. If Stop It Now wants to sugarcoat, that is THEIR business. But it isn’t mines. If I suspect someone is a pedo, I will let them know I think they are sick in the head and should get help. If I suspect someone might be a recent or active CP downloader, I will tell them that they WILL be prosecuted or even killed if they don’t stop and get help and yes, I will be fucking blunt. Fear is a strong motivator. If it can be used as a tool to move someone in the wrong direction, it can be used to move someone in the correct direction.

Isn’t it past your state-mandated bedtime in the land of kangaroos and censorship boards?

Every day you people post on the forum, the prospect of range-banning the nation of Australia becomes more and more attractive.

I live in Australia but am moving to New Zealand for a couple years after this pandemic is over. WTF does this have to do with ANYTHING

Australia censors and bans pretty much everything.

We have standards in our country. If you do not want to comply, we don’t want that content here.

We have standards in our country.

A country ran by a prudish censorship/ban happy government is considered standards now?
That’s news to me.

The one that needs to get lost would be you, I can respond to whatever

Its pretty easy to “pick on” a country that is in the wrong in this situation, same thing with QAnon members

Frankly, Australia is about as shit as China, just for different reasons. And while I am a US citizen, I was born in China.

We don’t want anything which normalizes sex acts of children.

You and your friends have been told dozens of times at this point it doesn’t. You lot don’t listen and have no intention to. You only want to hear opinions that align with your own and nothing else.

We have given you proof, several times in fact. You ignore it.