Indiana Jones is now a "pedophile"

I’ve seen the original story outlines by Lucas and Spielberg. Marion was 11 when she had her fling with Indy. The whole point was to establish him as a roguish (but intellectual) adventurer. Her age has now been retconned to 16, since Karen Allen was about 26 when she played the role, and it happened a decade before.

"We don't know what the circumstances are."

(laughs in Sesshomaru X Rin) See. At this point, trying to shame me using general standards is kind of pointless after I follow my own Path of Enlightenment with confidence.

I also just realized that this is the Indiana Jones equivalent of “Han shot first”!

Pedophile is the new “literally Hitler”.

Which is humorous considering pedophiles and zoophiles were also targeted during the Holocaust (the pink triangle was ascribed to ALL prisoners with “aberrant” sexualities, not just gay men). In Nazi concentration camps, each prisoner was required to wear a downward-pointing, equilateral triangular cloth badge on their chest, the color of which identified the reason for their imprisonment. Early on, homosexual male prisoners were variously identified with a green triangle (indicating criminals) or red triangle (political prisoners), the number 175 (referring to Paragraph 175, the section of the German penal code criminalizing homosexual activity), or the letter A (which stood fo Later...

“The pink triangle was also assigned to others considered sexual deviants, including zoophiles and pedophiles in addition to sex offenders.”

Notice the distinction made between pedophile/zoophile and sex offender by the Nazis. Even pedophiles not convicted of any crime were subject to genocide.

So, in fact, discriminating against pedophiles and wanting them all dead is what makes someone “literally Hitler”.

We all have a little dormant Hitler inside of us. No one is exempt. When I proclaimed this truth of human nature in front of my research methods class during my graduate studies, most people got extremely offended. The only two exceptions were my professor, who chuckled, and the woman who became my girlfriend for nearly 3 years.
This situation shows that the little Hitler hypothesis has a lot of truth to it.

Pretty sure that this is satire, but according to this chart, people with our… appetites lean towards the economic right and a bit towards authoritarianism, oddly: 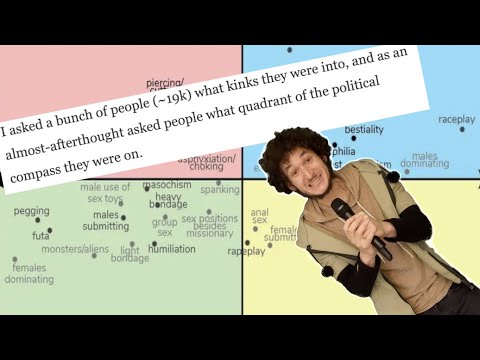 I usually jump between libleft and authleft, tho more often libleft. Never too extreme, mind you. I personally detest socialism and anarchism, tho I hate fascism more. People accuse me of being a dirty centrist: I just strongly disagree with extremism/terrorism.

I took the test and was lib left, lower left quadrant.