Stop using "pedophile" as an insult

Quick: What’s the worst word you can think to call someone? Ask the majority of folks this question and aside from racial and ethnic slurs, they’ll say ‘pedophile’.  And sadly, that’s one of the slurs most commonly used against the LGBTQ+ community.   Below, we dive into why LGBTQ+ folks are so often the target of…

No, I will refuse to stop using pedophile as an insult. Their thoughts disgust me to no end.

It’s possible to keep pedos stigmatized without having that branch over to LGBT people. The left thought by increasing acceptance for LGBT people would mean pedos would eventually be accepted. Such fucking idiots I swear. As a neo-reactionary, I have come to accept LGBT, but I still refuse to accept pedos. 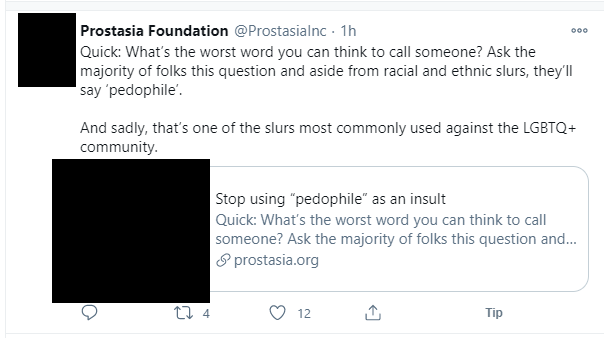 Best definition of “pedophile” thus far. You could also read it literally.

If we go past random Greek / Latin geeking:

A pedophile, as defined by the Diagnostic and Statistical Manual of Mental Disorders, is a person who has intense and recurring sexual interest in and/or fantasies about prepubescent children.

Yeah. Pretty much. But, this is the sort of definition, which can lead to normies getting pathologized. Pedophilia, also known colloquially as “pedophillic disorder” is when an individual has an attraction to children, which is stronger than their attraction to adults.

Attraction intensity fluctuates over time, but it’s usually strongest on the onset, and weakens over time as you get used to it. If you reject it, it will usually become stronger and more intrusive, although accepting it is easier said than done, if a backwards country and very primitive country, threatens to imprison for something as simple as viewing pornography, even if they reduce it to an absolute minimum, or try to dilute it with competing sources.

I see a lot of pedophiles. I saw more in the past. Fewer now. And more law abiding ones. From interactions with ones who like lolis, a few are really nervous, and frankly, ridiculously paranoid about “molesting people”, but they quickly discover they would never do that. I don’t even know who or what put that ridiculous notion in their heads.

Pedophiles are usually fairly gregarious, friendly, and happy. Sometimes, they do things they shouldn’t, like breaking some law. But, they usually try to reduce that to a minimum, whenever possible. I could tell them off. But really, that would just be infantilizing them, someone can make their own decisions about their own lives.

Being a pedophile naturally means someone can invent new laws at any given moment to screw you over. And they will this for no reason, other than that they can, and they feel sadistic. They don’t actually care about children. They defund and dismantle safeguards to prevent children from being abused all the time. They just want to shit on the “other”. In Asia, drug dealers are the other who get executed. Not that long ago, homosexuals were the boogeymen in the West. Before that, Communists. Those filthy
commies. Remember that?

On the contrary, the pedophiles who seem disordered and weird, are the ones who play weird abstinence games, even when they’re perfectly capable of doing something positive with their lives. They then whine and rant and appear in pointless little sob articles, which get twisted by conservatives and people with an agenda like Jeremy Malcolm, along with Rahm who appeared out of thin air a year ago, and gets funds from questionable sources, and whose entire platform is built on providing questionable sketchy wonder cures.

Good gracious, this field is fucking corrupt with all sorts of “organizations” making all sorts of impossible and ridiculous promises about recidivism reduction to get more funding. It’s just a game to them. Normies don’t give a shit.

And it all empowers the leftist pseudo-progressive bullshit machine which can’t remember what it was prattling about a few minutes prior. Probation is the best thing ever. Probation is now the worst thing ever, it’s just a revolving door to throw people back in prison. Pitiful. Pathetic. Vice can’t keep their story straight with whatever quack appeared last week, and wants to get their shot at five minutes of fame. Now, they can’t even decide if unverified content on Pornhub is a “bad thing” or not, when they were going on about it for years. Are they just doing this to be edgy and get more clicks by going against the mainstream? The left is cancer.

This is the sort of bullshit pedophiles have to deal with. Not only do people not really understand pedophiles, but every special interest group wants to use pedophiles as a tool to get ahead, and don’t care in the slightest beyond that.

Is it surprising then that pedophiles come off as strange and “disordered” to people who never tried to understand pedophiles and simply want to pretend pedophiles don’t exist? Perhaps, they should try living without ever looking at pornography (with some bullshit exaggerated excuse barely grounded in fact about how they have magic psychic powers which can mind rape someone), having a relationship, and being told they’re the son of Satan whenever it strikes the fancy of some third rate hack. Hah.

This isn’t the post you wanted to read, the one I wanted to write, but it gets a point across. Thoroughly. It is also why I fundamentally don’t think the whole “pedo friends” progressive thing will ever work out. But, thank you for writing an okay article without saying my friends need to be locked in a mental hospital, or brainwashed into thinking they’re evil. This is a good step forward. I look forward to more.

Absolutely, anymore than in “Bibliophile”, “Oenophile”, “Francophile” or “Technophile” to name but a few. Similarly, this should also apply to “Necrophile” (eg: a Taxidermist or enthusiastic Mortician), or “Zoophile” (eg: David Attenborough).

When the DSMMD included the term in 1952, it was no doubt assumed that as “pedophilia” was the generally accepted term, they had no reason to consult the text that has pretty much been universally ascribed as the source of it; Richard von Krafft-Ebing’s seminal (ironically) work “Psychopathia Sexualis”. If they had, then they should have discovered that he did not use this term for the sexual attraction to children (because he was a clever man who understood Greek and new that this is not what it meant) he actually led with the term “Paedophilia Erotica”. “Erotica” used in this way alters the meaning of the word “Paedophilia”; it is what linguists term as qualifying the noun.

Another clue can be gleaned from the word “Paraphilia”. This is a more scientific way of saying “perversions”. However, although etymologically the prefix “para-” can have many meanings (from “resembling” to “abnormal”), one thing it most certainly does not mean is “the same as”. Indeed, other than when it has been co-opted in recent times as the prefix in portmanteaux (paragliding, parasailing), regardless of whether it has a Greek or Latin root, it specifically infers a meaning that excludes the interpretation it would have without it. So “Paraphilia” means “anything but a philia”, ie: NOT a love or attraction of.

Shame I can’t find a similar argument for the word “Nonce” (other than it sounds childish).